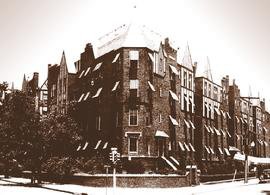 Built in 1929, the Rockville Tudor was a ground-breaking luxury apartment building responding the village’s population boom in the late 1920’s. This +4-story brick and masonry building was the first elevated building of its kind on the south shore of Long Island.

Informally known as “The Wedge,” the Rockville Tudor was home to the rich and the famous, including socialites and renowned pilot, Captain Frank M. Hawkes. Adding to the prestige was the Rockville Grille, a fine dining establishment catering to the elite until its licenses and permits were revoked due to patrons enjoying a frolicking good time during the Prohibition.

Today, the building is undergoing a revitalization to restore the original character of this landmark while upgrading the building and services towards current codes.